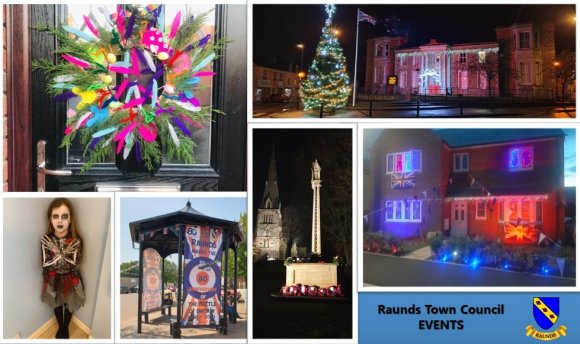 Due to the COVID-19 pandemic all our events were cancelled, we moved our events online and important occasions where marked in a socially distanced way.

Raunds Mayor, Cllr Richard Levell was joined on the steps of the Town Hall on Monday 9th March 2020 by fellow Councillors, staff and students from Manor School, St Peters School, Windmill Primary and Park Infants School. During the short service Cllr Richard Levell read a message from the Secretary-General of the Commonwealth of Nations, The Right Honourable Patricia Scotland QC followed by Deputy Mayor, Cllr Wilkes who read a message from Her Majesty the Queen. The Town Clerk concluded proceedings with the reading of The Commonwealth Affirmation whilst the flag was raised

In the unprecedented times of the pandemic, the Town Council were aware that many of the older residents were finding the current situation particularly difficult.

More than 150 residents regularly attended our film and coffee afternoons which were important to keep our residents connected. Whilst we could not hold these events we wanted our residents to know that we were thinking of them, so provided them with information and a little light relief to help them through this difficult time.

The Isolation Care Pack where delivered from April 2020 through to February 2021 with a special themed hamper at Christmas. 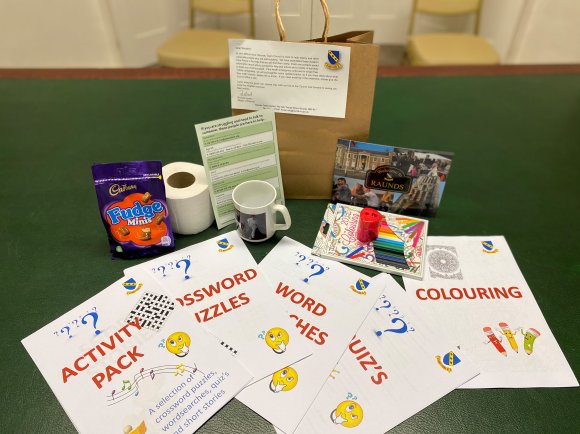 To bring the community together during the difficult time of the pandemic, we wanted to spread a little positive cheer throughout Raunds. We invited residences to decorate their window, and be as creative as they liked. We had 45 fantastic entries with prizes awarded to the winners. 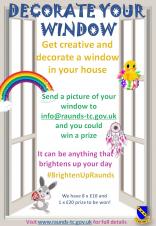 As part of our VE Day Celebrations we asked Raunds residences to help mark the 75th anniversary of VE Day by decorating their house in red, white and blue. Local children also create posters to mark this historic occasion. The market square, town hall and main street were also decorated with bunting and banners. 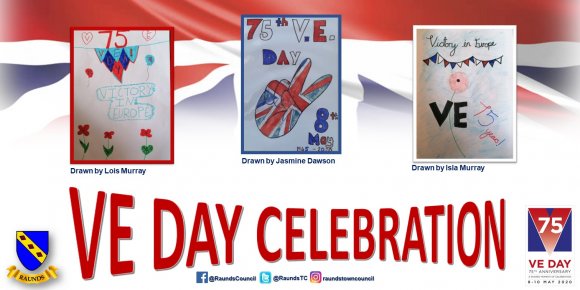 Whilst social distancing measures meant that we were unable to invite the public and guests to join us this year, Cllr Sylvia Hughes the Mayor of Raunds marked the occasion by raising the Armed Forces flag at the Town Hall. The Mayor was joined by her consort Cllr Dudley Hughes, along with Cllr Helen Howell, Chairman of East Northamptonshire Council; Cllr Lee Wilkes, Deputy Mayor of Raunds and local veteran Mr Nick Fall.

Raunds Mayor Cllr Sylvia Hughes was joined by East Northants Council Chairman, Cllr Helen Howell and Rev Jon Aldwinckle to mark the 80th Anniversary of the Battle of Britain. Banners were also displayed at The Town Hall and Market Square to mark the occasion. 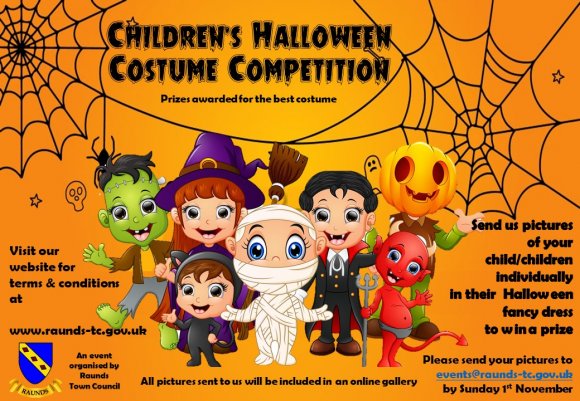 A socially distanced Remembrance Sunday Service was held at the War Memorial, St Peter's Church, Raunds. The service was attended only by Councillors, our local MP and representatives from recognised organisations. The short service paid tribute to those that have fought in both World Wars, have served in the armed forces, those that are still serving and families of those that have lost their lives or are still serving. The Mayor of Raunds Cllr Sylvia Hughes laid a wreath on behalf of the people of Raunds. Due to the current situation many businesses, groups and organisations were unable to attend and their wreaths were laid on their behalf by Raunds Town Councillors. We also recognise the contributions of those groups, organisation, businesses and individuals who at this difficult time have paid their respects and laid their wreaths privately.

Santa visited Raunds in a Covid secure way this year using his specially made Grotto at The Snooks in Raunds. The grotto was a sell out with all the proceeds donated to the Mayor's Charity, Family Support Link. 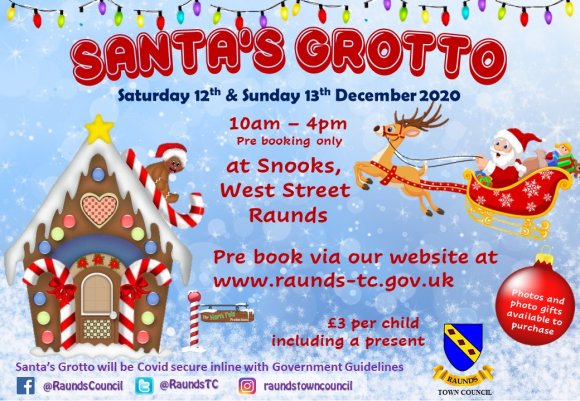 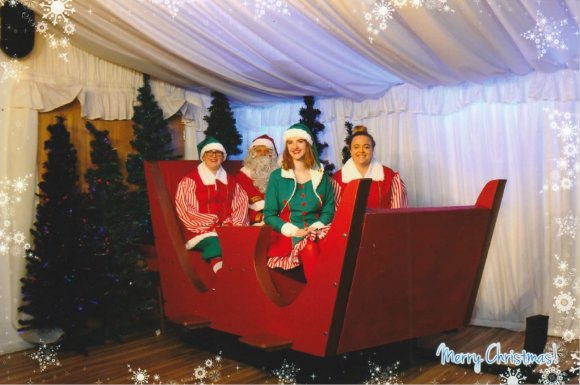 Unfortunately due to the pandemic our annual Christmas Market and Lights Switch on event could not take place. This year we invested in new lighting and infrastructure for the Christmas lights, which were switched on by the Mayor Cllr Sylvia Hughes and her consort Cllr Dudley Hughes.

The annual Children's Christmas Light Competition took place with lots of entries from the children at Windmill School and Park Infants School. The winning design is pictured below.

We also ran a Light Up Raunds Competition, where residence decorated their house to help light up Raunds and spread a bit of sparkle in their neighbourhood. The competition was judged by Cllr Sylvia Hughes, Mayor of Raunds and the big man himself! 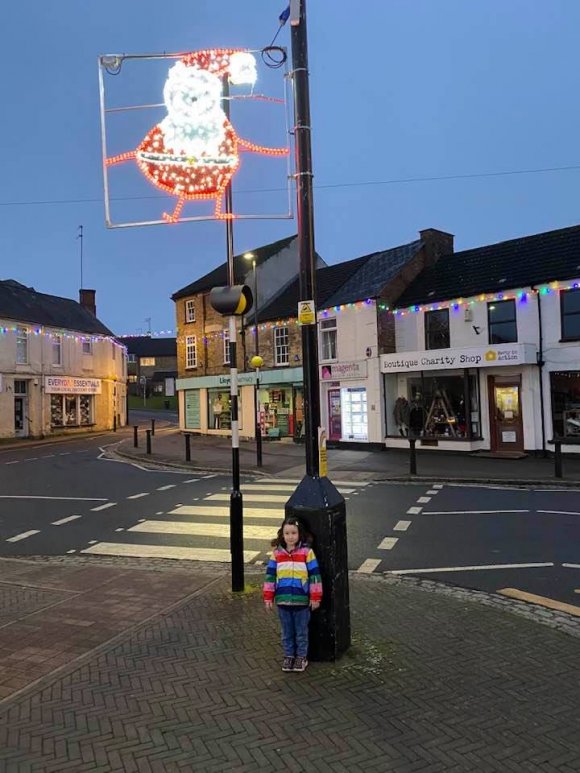 This year's winner Harriet turning on her winning design. 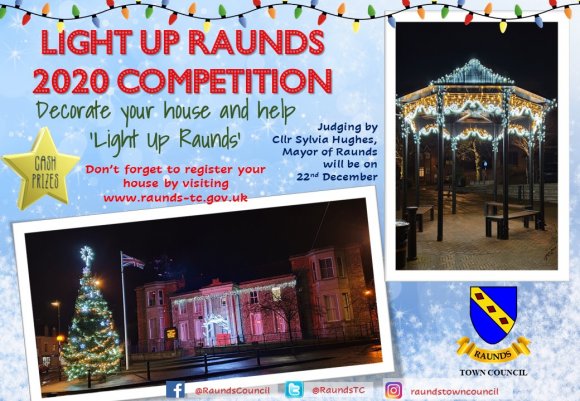