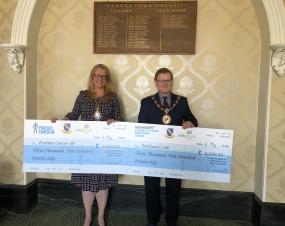 "I'm thrilled to have raised this money for these charities, fundraising is always hard work, but I have been excellently supported by my wife, Magdalena, who has been Mayoress of Raunds, my fellow Councillors in Raunds, East Northamptonshire and beyond, and by the wider public."

To raise funds Cllr Levell ran a quiz night and a curry evening, and this year his flagship event was a Burns Night Celebration in January. In addition, funds were raised at the Raunds Mayor's Show and the Raunds Christmas Market and Lights-Switch-on, as well as sales of second-hand books in the Saxon Hall.

Sadly, the current Coronavirus pandemic has meant that a number of activities planned for March, April and May had to be cancelled otherwise the total fundraising would have been higher. In these difficult times it has been well documented that donations to charity have been greatly reduced. "So I am really pleased to be able to make this contribution to these excellent charities, whose support is still needed by so many people" added Cllr Levell.

Prostate Cancer UK is warning that the current reduction in donations risks a reduction in research which is vital to help fight the disease. Both Parkinson's UK and Prostate Cancer UK have dedicated webpages giving specific advice for those suffering from those conditions on staying well during the current Coronavirus crisis, and where to gain access for additional support if some regular support becomes temporarily unavailable.

Cheques will now be sent to the two charities to help support them with their excellent work.

Cllr Levell is now coming to the end of his second term of office as Mayor. Raunds Town Council will elect a new Mayor on May 12th