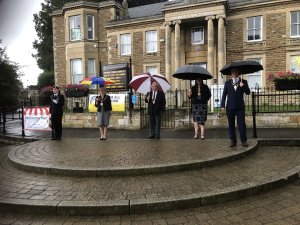 The people of Raunds and Raunds Town Council have always supported the Armed Forces.

Whilst social distancing measures meant that we were unable to invite the public and guests to join us this year, Cllr Sylvia Hughes the Mayor of Raunds marked the occasion by raising the Armed Forces flag at the Town Hall. The Mayor was joined by her consort Cllr Dudley Hughes; Cllr Helen Howell, Chairman of East Northamptonshire Council; Cllr Lee Wilkes, Deputy Mayor of Raunds and local veteran Mr Nick Fall.

Armed Forces Day is a a National occasion for us to show our support for the Armed Forces for the outstanding work that they do for our country.

Showing support for the Armed Forces provides a much valued morale boost for the service personnel and their families. We in Raunds have a strong tradition of showing such support and respect for our Armed Forces. most especially we thank and honour those service personnel from our own town who do such vital work to keep us all safe. So on behalf of the people of Raunds we are proud to raise the flag in honour of our Armed Forces. #ArmedForcesDay