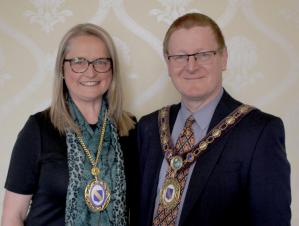 We are pleased to advise that at our Annual General Meeting of the Town Council on 10th May 2022 Councillor Richard Levell was elected Town Mayor for the 2022/23 Civic Year. Cllr Levell's consort for his Mayoral year will be Mayoress Cllr Magdalena Levell.

"It is a great honour to be re-elected as Mayor of Raunds for the civic year 2022/23. Now that things are getting 'back to normal' following the pandemic, it should be an exciting year for the residents of Raunds, and I am very pleased to be able to contribute to this. I will be holding several charity fund-raising events for my chosen charities for the year - the Raunds Foodbank and the East Northants First Responders, and I hope that these will be well-supported to raise money for these services which are vital for our local community". Cllr Richard Levell

Councillor Lee Wilkes was elected as Deputy Mayor with Cllr Helen Howell as his consort.

Any correspondence for the Town Mayor or Deputy Mayor may be sent to the Town Council offices at the following address: Town Hall, Thorpe Street, Raunds, Northants, NN9 6LT or emailed to mayor@raunds-tc.gov.uk

Notice of Vacancy in office of Councillor bit.ly/3NlnXxL