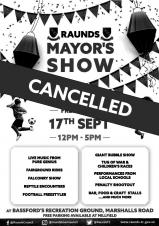 Following the announcement of the passing of Her Late Majesty Queen Elizabeth II, we entered into a 10 day period of National Mourning.

As you may have seen, many organisations and businesses have cancelled events as a mark of respect to Her Majesty.

The Mayor's Show, which was scheduled to take place on Saturday 17 September, falls within the period of National Mourning and so Raunds Town Council have taken the decision to cancel the event in accordance with the national protocol to be observed following the passing of the sovereign.

We are as disappointment as you that this event cannot take place as planned.

It is the Council's intention to bring next year's Mayor's Show forward to May and many of the stallholders and entertainers have already agreed to reschedule.

Something to look forward to…

This years Raunds Mayor's Show is on Saturday 17th September 2022.

Good Old Fashioned Fun for the whole family at