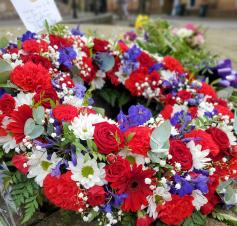 SUNDAY 18TH SEPT - A Service of Holy Communion to Commemorate Marking the death of Her Late Majesty Queen Elizabeth II at St Peter's Church, Raunds at 10am.

SUNDAY 18TH SEPT – National Moment of Reflection. The Mayor will lead the National moment of reflection by observing a minute's silence outside the Town Hall at 8pm.

TUESDAY 20TH SEPT - The flag will be raised to full mast at 8am.

BOOK OF CONDOLENCE - The book of condolence is open to sign in the Town Hall, Raunds, between 9am - 6pm until TUESDAY 20TH SEPT, except for the day of Her Late Majesty's funeral on Monday the 19th.

FLORAL TRIBUTES - If you wish to leave flowers, a place has been made available in front of the Town Hall by the flagpole for floral tributes. The flowers will be sensitively removed by Councillors and Council Officers at 9am on Tuesday 20th Sept.