It's A Wonderful Life

George Bailey (James Stewart) has spent his entire life in the small town of Bedford Falls. Despite his yearning to see the world, George has always sacrificed his personal ambitions for the sake of his family and the local community, settling down to marry his childhood sweetheart, Mary (Donna Reed), and raise a family. However, when a huge amount of money goes missing from his savings and loans company he panics and finds himself preparing to commit suicide. He is shown the error of this idea by Clarence (Henry Travers), an angel who has been sent to Earth in order to earn his wings. To this end, Clarence shows George just how badly Bedford Falls and its residents would have turned out had he never been born.

Showing at Saxon Hall, Raunds on

£1 entry (includes a glass of Mulled Wine & a Mince Pie) 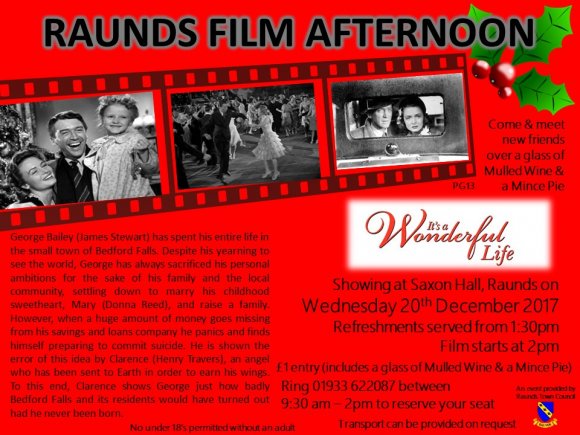